No stranger to ‘falling on my face’

It’s been a while since I have updated this blog.
To be honest, I just forget…There are now so many different places you can ‘update’ happenings, that by the time I have blabbed on one social media platform, (sadly mostly Facebook)I have taken up all my blabbing energy for a week or so…

I have just finished recording an 11 track album here in Sao Paulo.
The album has been sent of to Brian Lucey of Brian Lucey’s Magic Garden Mastering for the mastering part.
This is new for me as for the last 3 recordings we have chosen Brad Blackwood from Euphonic Mastering  I am nervous and very excited at the same time…
I chose a different team this time, due mostly to the fact that this new album is going to be so very different than the other ones I have been a part of before.

The album will be called Fight or Flight and is produced by Caetano Malta , (who you can see by this video, is a wee bit of a Moog/Synth fan), and mixed by Bruno Buarque (who also, along with Caetano tour and record with Lucas Santtana as well as record and tour with Karina Burh)
The list of musicians on this album cover the spectrum of alternative Independent Brazilian musicians…I am just happy I got to tag along.

This coming Tuesday, I will be launching my second Pledge Music Campaign…I am really hoping that some of you lovelies who supported my last album, will be interested this time around, as well as a bunch of new faces that I have had the pleasure to meet.
I have COOL treats for you pre-orderers including REMIXES of a couple of songs…I admit to NEVER really being cool enough to have remixes before, and infact, I amy have missed the boat entirely…But nonetheless, I will have some….Maybe I can be remixed into someone’s JOGGING music….

So 2 weeks ago, I was entered into a 10KM NIGHT race, here in Sao Paulo. 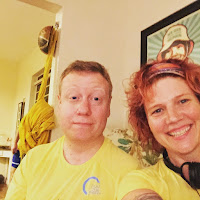 I was so excited to be a part of this(along with about 1200 other people)as I prepared, trained AND even worried about what I was going to wear to this run, and which shade of lipstick goes best…I mean, I was ready to ROCK THIS!

In my own history, whenever I get so excited about something in my head, that I actually daydream about massively excelling in it…SOMETHING always goes wrong.
Call it KARMA, or something else…But I can assure you, I usually end up falling flat on my face.

This time was no different. 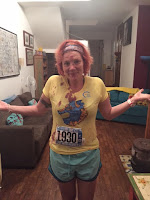 At exactly the 2KM mark of the race, I turned
around, beaming, possibly smug, and said to my husband, who was just behind me, ” 2k, LOOK HOW QUICK THAT WAS!!!”
Turned forward and promptly fell flat on my face.

For those of you who have seen me run….It takes a while to get going, and MUCH longer to stop. 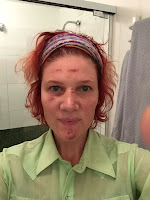 So I skid along the pavement for a few seconds,with my hands nowhere in sight…Just my left knee and my face to buffer me….

Two weeks later my face is on the mend…I may have broken something in my nose, but to be honest, this nose has seen its share of pavement before, so I am chalking it up to ‘Life Experience’ and am looking into SPEEDWALKING.

As of today, I do look normal. I don’t want to leave anyone scarred with these images…But you can imagine the looks I got at the school pick up and drop off!!!!! haaahaaaaaaa